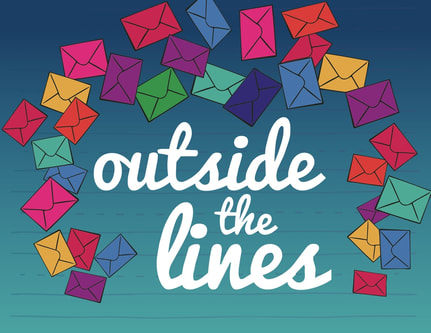 Two pen pals, Bud and Vi, brighten each other's lives from afar. Bud lives in a straight-line world of tall, tall buildings. Vi lives in a curvy-line world of rolly, rolly hills.  Bud and Vi have never met, but they create a world together by exchanging lines...through the mail.

Scored by lively tango music and featuring interactive projection design, Outside the Lines is a new nonverbal play for ages 2-5 and their families about one of our earliest and deepest joys: connection.

Outside the Lines is packed with "An awful lot of creativity." DC Metro Theatre Arts called Outside the Lines "a fun and affordable way to spend an afternoon with your child." Read the whole review here.

Continue the experience at home with our Outside the Lines Family Guide and Study Guide. Enjoy activities inspired by the show and extend learning beyond the production.

Tia Shearer Bassett (Creator) is a DC-area theatre-maker, performer and teacher, and a proud original company member of Arts on the Horizon. Previous collaborations with the company include Space-Bop (creator and director), Under the Canopy (co-creator and co-director, with husband Matt Bassett) and Out of the Box (co-creator and performer). She is on faculty at the National Conservatory of Dramatic Arts and Theatre Lab, and holds a B.A. from NYU's Gallatin School for Individualized Studies and also her 4-year-old's hand. She had multiple penpals as a child, and still prefers to write with old-fashioned pen and paper. ​
Megan Alrutz (Director) is a director and dramaturg focused on theatre with and for youth. Most recently, she has worked with Seattle Children's Theatre on Mo Willem's Naked Mole Rat Get Dressed: A Rock Experience, Arts on the Horizon on Point A to Point B, Metro Theater Company on Talkin’ Trash, and the Kennedy Center on Elephant & Piggie's We are in a Play. Megan is a professor at The University of Texas at Austin where she heads the MFA program in Drama & Theatre for Youth & Communities, In addition to making work for young audiences, Megan co-directs the Performing Justice Project, collaborating with teenagers to create original performances about gender and racial justice in our lives and communities: performingjusticeproject.org.
Robert Humphrey (Scenic/Prop Designer) is super excited to be working with such a talented and creative team at Arts on the Horizon. You can usually find him as a sound engineer at the John F. Kennedy Center for the Performing Arts. His favorite scenic designs have been Sweeney Todd, Tommy, Bye Bye Birdie and The Rocky Horror Picture Show. He was the head of technical theater at Long Lake Camp for the Arts in Long Lake, NY for 18 years and enjoyed every minute (almost). In fact, his most enjoyable time there was meeting a lovely woman called Fiona, whom he caught off guard and married. They have two beautiful children Isla-Rose and Angus. His friend the great Tia Shearer Bassett has called him a Dad, a Lad and Supa-bad! He is also a beekeeper.
Patrick Lord (Projections Designer) is a projection and scenic designer who is excited to be working with Arts on the Horizon for the first time.  Recent DC credits include: Big Fish, Outside Mullingar, American Idiot, Picasso at the Lapin Agile, How to Catch a Leprechaun, An Irish Carol, and The Magic Tree (Keegan Theatre); Building the Wall, Blackberry Winter (Forum Theatre); Mnemonic (Theater Alliance); A Human Being Died That Night (Mosaic Theatre Company of DC); Where Words Once Were (The John F. Kennedy Center for the Performing Arts); Knuffle Bunny: A Cautionary Musical, Jumanji (Adventure Theatre MTC); The Happiest Place on Earth, Redder Blood, Leto Legend (The Hub Theatre) The Phantom Tollbooth (Georgetown University).  Regional credits: Beauty and the Beast, Chitty Chitty Bang Bang (The Croswell, MI), Still Now (Shrewd Productions, TX), and Peace On Your Wings (HI).  In addition to his theatre work, Patrick has designed projections for numerous professional sports teams, such as the Chicago Bulls, Cleveland Cavaliers, and Atlanta Hawks while working with Quince Imaging.  He is also the creative director and founder of The 5th Wall Project, an innovative arts-service that creates unique narrative experiences with children. Patrick holds a MFA from the University of Texas at Austin.  More examples of his work can be seen at www.patrickwlord.com.
Amy MacDonald (Costume Designer) is a 2017 Kenan Fellowship recipient in Costume Design. Recent productions include Florencia in El Amazonas (designer) at The Fletcher Institute of Opera, Good (designer) at UNC School of the Arts, Peekaboo! A Nativity Play (designer) at The Hub Theatre, The Best Christmas Pageant Ever (designer) at Anacostia Playhouse, Crazy For You (asst. designer) at Signature Theatre, and 4,380 Nights (asst. designer) at Signature Theatre.
E-hui Woo (Lighting Designer) is a Singaporean DC-based lighting designer who is super excited to be making art with Arts on the Horizon! Recent lighting designs include The Real Americans and Draw the Circle (Mosaic Theater Company), No Word in Guyanese for Me (Rainbow Theatre Project), Tartuffe and Copenhagen (Perisphere Theater), Rabbit Summer and Clover (Ally Theatre Company), Assassins (Pallas Theatre Collective), To Tell My Story (The Welders), The Ugly One and Exit Carolyn (Nu Sass), Plantagenet Rep (4615 Theatre Company), Source Festival 2017, .d0t :: a RotoPlastic Ballet (Pointless Theatre), TAME. (WSC Avant Bard), and Man of La Mancha (The Arlington Players). Recent assisting credits include Two Trains Running (Arena Stage) and The Lover & The Collection (Shakespeare Theatre Company). E-hui wants to thank Ithaca College for her BFA and her special guy for all his love and support. Her portfolio can be found at www.e-hui.info.
​Joan Singer (Music Director) had no idea where starting violin lessons at age 8 in a small town in North Carolina would lead: first, discovering a violinist can make the listener cry, dance, or laugh; next, recognizing one can re-invent oneself on stage; finally, realizing art can create communities, expand horizons and change lives for all ages. As music director and violinist with QuinTango (the music source for OTL), she performs internationally and teaches locally. She is excited to partner with Arts on the Horizon and to be so warmly welcomed into this talented theater community.
Drew Neitzey (Stage Manager) is delighted to be teaming up with Arts on the Horizon. Previous D.C. credits include The Hard Problem and Hand to God (Studio). Other credits include productions with the Kennedy Center, Goodman Theatre, The Glimmerglass Festival, Endstation Theatre Company, and the American Pops Orchestra. Drew received his B.A. in Theatre Arts and Communication Studies from Stetson University.