Created and Directed by Matt Bassett

Best for children ages 2 - 6 and their families.

Nutt and Bolt are robot rivals. They spend their days using the random junkyard objects around them (and on them!) in games of skill and sound, rallying their wee friends, the audience, for support. As the competition builds to a frenzied pinnacle, Nutt and Bolt realize that by working together, they can make something even more wonderful than they could on their own! Together, sounds become stories, notes become music, and the world becomes full of possibility. 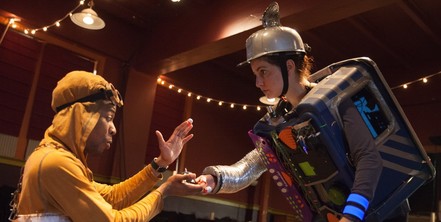 Matthew Bassett (Creator and Director) is a DC-area director and a proud company member of Arts on the Horizon. Additionally, Matt is Associate Artistic Director of The Hub Theatre in Fairfax, VA. He previously directed and created Under the Canopy (2014) and Out of the Box (2012) with his wife, Tia Shearer, for AotH. His DMV credits include multiple productions with The Hub Theatre (including 2014’s Failure: A Love Story, nominated for 6 2015 Helen Hayes Awards including Outstanding Direction and Outstanding Play), productions with Flying V Theatre and Compass Rose Theatre. Educational directing includes productions with The Catholic University of America, Kaiser Permanente’s Educational Theatre Programs, Montgomery College, MC Summer Dinner Theatre, Metropolitan School of the Arts and Imagination Stage’s Education Department. Matt holds an MFA in Acting from the University of Tennessee, serves as Theater Department Chair of Metropolitan School of the Arts, teaches on the faculties of Montgomery College, The National Conservatory of the Dramatic Arts and Imagination Stage, and served as a judge for the Helen Hayes Awards from 2013-2016. He lives in Takoma Park, Maryland with his family.
Patrick Calhoun (Sound Designer) is a composer and sound designer, and is excited to be working on Nutt and Bolt! Patrick has worked with companies in the region including Woolly Mammoth, Shakespeare Theatre, Folger Theatre, Center Stage, Roundhouse Theatre, The Kennedy Center, Theater J, The Hub Theatre, Imagination Stage, Anacostia Playhouse, No Rules Theatre Company, The Arts Collective at HCC, The National Gallery of Art, Step Afrika!, Dance Exchange and others. For the 2012-2013 season he received the William R. Kenan, Jr. Fellowship at The Kennedy Center in Sound Design. Patrick completed graduate school at the University of North Carolina School of the Arts, and prior to that, his Bachelors at Greensboro College, North Carolina. Additionally, he has worked with Philadelphia Theatre Company, Barrington Stage Company, Triad Stage, Utah Shakespeare Festival, The Utah Festival Opera, Theatre West Virginia and JHE Production Group,among others. For more information visit ​www.patrickcalhoun.info.
Julie Cray Leong (Costume Designer) is the Assistant Costumer and Costume Shop Manager for the Catholic University of America’s Drama Department. Recent costume design credits include Catch Me If You Can (NextStop Theatre);  Chalk and The Winter’s Tale (We Happy Few Productions); Love’s Labor’s Lost, The Maid’s Tragedy, Hamlet, Women Beware Women, The Duchess of Malfi, and The Winter’s Tale (The Shakespeare Theatre’s Academy for Classical Acting); Bloody Poetry, Big Love, The Mage Knights of Eternal Light, Fifi and Hunter Forever!, and Brutus (The Catholic University of America). She holds BA in Drama from The Catholic University of America. www.JulieCrayCostumes.com
Susan Miranda (Set/Props Designer and UpCycle Consultant) is the Co-Founder and of UpCycle. For as long as Susan can remember, art has been a part of her life. Susan considers herself a “dabbler,” as she loves to try all sorts of art making. She cannot pick just one medium for creating.  She feels great satisfaction from the process of creating. Susan began her teaching career teaching art in the Fairfax County Public Schools. Susan then shared her enthusiasm for creating with children ages 2.5 to 5 years old as the Studio Teacher at Beverley Hills Church Preschool in Alexandria, Virginia from 2007-2012. At UpCycle, Susan infuses her knowledge of materials and resourceful ways to use them into UpCycle’s programs and workshops.
​﻿Kira Burri (Resident Stage Manager) is an actor and stage manager in the DC area.  She was introduced to theatre at 8 years old, and she's hasn't looked back since. She has previously stage managed for Arts on the Horizon's Adventures with Mr. Bear. Other recent theatre credits include Company, Big Love, Oedipus, and the world premiers of La Perdida and Legacy Street.  She has also worked with Longacre Lea, serving as an assistant stage manager and performer in Pol Pot and Associates LLP.  Kira received her BA from Catholic University. She would like to thank Michelle and the entire Arts on the Horizon team for giving her this wonderful opportunity!