Written and Directed by Natalie Cutcher and Amanda Forstrom

One snowy winter morning, Mr. Gumdrop prepares for his annual holiday party!  When an unexpected and curious mouse appears, Mr. Gumdrop's routine is thrown for a loop. Can these two wildly different characters work together to get the holiday preparations done in time?  This nonverbal, imaginative production captures the magic of making new friends and sharing ideas to accomplish big goals.​ 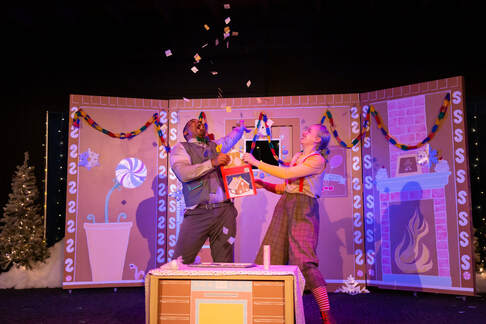 Squeakers & Mr. Gumdrop is sponsored by

Natalie Cutcher (Co-Writer & Co-Director) recently earned her MFA through The Shakespeare Theatre Company's Academy for Classical Acting at GW. In undergrad, she double-concentrated in Acting and Directing. She also studied Commedia dell'Arte and Clowning while abroad in Arezzo, Italy. You may have seen her onstage in Arts on the Horizon's productions and remounts of Snow Day and Point A to Point B. Other local collaborations include Constellation, Faction of Fools, Rorschach, Theater Alliance, WSC Avant Bard, and Flying V. She is a proud company member and teaching artist for Arts on the Horizon and hopes you enjoy the show!

Willow Watson (Set & Props Designer) is a freelance props and scenic designer based out of Washington, D.C. and a William R. Kenan Jr. Fellow at the Kennedy Center. Recent D.C. prop designs include Native Son, Sooner/Later, Fabulation, and Theory with Mosaic Theater of D.C. as well as Henry IV and The Diary of Anne Frank with Chesapeake Shakespeare Company. Recent scenic designs in the D.C. area include The Laramie Project at Studio 39 and the Capital Fringe Curates Series. More information available at www.willowscenic.com.

Julie Cray Leong (Costume Designer) is a graduate of The Catholic University of America with a BA in Drama. Her most recent projects include: She Kills Monsters (Rorschach Theatre), The Wolves (Catholic University), As You Like It, Macbeth, and Measure for Measure (STC Academy for Classical Acting), Lady M (The Welders), Ghost Light (Parlor Room Theatre), The Oldest Boy (Spooky Action Theatre). She is so happy to be back at Arts on the Horizon after previously designing for Beep Beep and Nutt and Bolt! She sends her love to her harshest critic, her toddler. For more information, visit www.JulieCrayCostumes.com.

Stephen Indrisano (Lighting Designer) graduated with honors from the University of Vermont in 2018  with a focus in Theater and Psychological Sciences. While in Burlington, VT, he designed lights for one of the Top Ten Fall Events in Vermont. After returning to the Mid-Atlantic, he designed lights for the world premiere of Craig Houk’s Cold Rain at Capital Fringe. He completed a year-long Production Apprenticeship at Imagination Stage in 2019. His work can be found at: Indrisanodesign.weebly.com.