Written and Directed by Patrick W. Lord and Megan Thrift
​
This world-premiere, nonverbal production is best for children ages  2-5 and their families
Three siblings find themselves in a room full of possibilities and one not so simple task- to put things in their proper place.  However, they soon discover that throwing this and that into a box is not the same as finding where it fits in.

Through clowning, movement, and original music, three performers will transform everyday objects into something extraordinary. Is a blanket a blanket? Or is it the sail of a boat setting off on an epic voyage? Together, we can find the magic buried in the bottom of every box, and hidden inside the world around us!​ 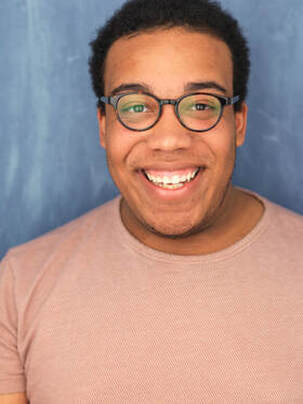 ​Christopher  (he/him) is an actor, director, and teaching artist in the Washington D.C. area. He is the creator/composer of Everyday Magic, an interactive digital series with Arts on the Horizon, and has appeared in Don’t Let the Pigeon Drive the Bus! (The Musical) at The John F. Kennedy Center TYA(Helen Hayes Award, Outstanding TYA Production); Gun & Powder at Signature Theatre; Matilda at Olney Theatre Center; You’re A Good Man Charlie Brown at Imagination Stage (Helen Hayes Award, Outstanding TYA Production); The Wiz at Ford’s Theatre (Helen Hayes Nomination, Supporting Actor); The Book of Will at Round House Theatre; and Macbeth at The Shakespeare Theatre. He holds a B.A. in English and Theatre from The College of William & Mary.
www.cmrich.me

​Kelly (she/they/Kelly) is DC-based multi-disciplinary artist working as a producer, director, projections & multimedia designer, and deviser for live performance. She is the Artistic Lead for Theatre at Flying V as well as the Digital Producer at Theater Alliance. She is a DCCAH Fellowship Awardee, a recipient of a 2019 Helen Hayes Award for Lighting/Projections Design for Blood At The Root (co-received with Alberto Segarra), a 2017-2018 NextLOOK Resident and a recipient of the 2018 Jim Henson Puppetry Grant. BFA NYU Tisch ’11 | MFA UMD ’18.

​Alexa (she/her) is a DC area costume designer and illustrator. Previous work includes The Madness of Poe and Snow Queen at Synetic Theater, and One Flew Over the Cuckoo’s Nest and Candide at Gallaudet University.

You can check out her other work at alexaduimstra.com

​Brian Gillick (Props Designer)
​
​Brian (they/them) is excited to be joining Arts on the Horizon! Prior credits include This Bitter Earth and Going to a Place Where You Already Are (Theater Alliance); Coriolanus and The Trojan Women Project (Brave Spirits Theatre); Truth and Beauty Bombs: A Softer World and Very Still and Hard to See (Rorschach Theatre). Brian graduated in 2014 from the University of North Carolina: School of the Arts with a BFA in set design.

​Natalie Cutcher (Present Box Artisan)
​
Natalie (she/her) is a proud company member and teaching artist with Arts on the Horizon. She wears many hats including deviser, director, performer, prop builder, and has a pretty green thumb to boot. Some of her memorable projects include assisting Matthew McGee with the Audrey puppets for Constellation's Little Shop of Horrors and creating Squeakers & Mr. Gumdrop with Amanda Forstrom here at Arts on the Horizon.