This whimsical production is a 35-minute interactive, non-verbal show, which features two adult actors and a musician.
Geared towards children ages 2-5. 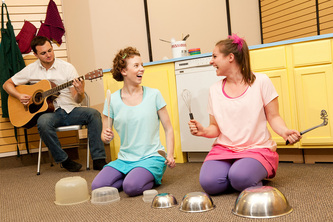 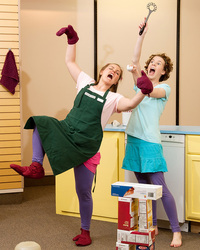 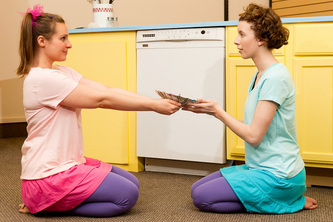 David Kilpatrick's playwriting career began in second grade with a show called Father Fox Tries to Get Some Chickens. Written on his parents' typewriter and starring his classmates, the piece proved to be so popular it then toured all the way down the hall to the first grade. Now, all of these years later, he's not only delighted to have made a career in theatre but is also honored to be here, with Arts on the Horizon, writing Drumming with Dishes. David has directed shows for numerous theaters, including Walnut Street Theatre's outreach programs in Philadelphia, PA and New York University and the Provincetown Playhouse in New York City. David is currently the Manager of Kennedy Center Theater for Young Audiences, working on in-house commissions/productions and also responsible for the program's national touring initiative. He received his Masters in Educational Theatre at New York University in 2002 and spent two years afterwards in the education department at The New Victory Theater. David has taught for NYU's Study Abroad programs, has worked with The Jim Henson Legacy and is on the Board of Directors for Theater for Young Audiences/USA. For Ian, who is the inspiration, in so many ways, for the conception of this piece.
Jennifer Furlong (Director)

A native of DC, and her theatre career spans over 25 years. Local acting credits from Arena Stage, The Kennedy Center, Source Theatre, Studio Theatre, Rep Stage, Everyman Theatre, Woolly Mammoth Theatre, and Round House Theatre among others started Jennifer's eclectic life in the theatre, a life that brought her from acting to writing, from writing to circus, from circus to producing, from producing to directing and from directing to parenthood. Four children, one circus company, and countless productions later, Jennifer homeschools her kids, lives in the country, raises chickens, watches her husband garden, and is slowly learning to make cheese. She intends for Drumming With Dishes to offer a perspective from which you (whomever You are!) can see your own radiant self. When you leave, you might keep that radiance with you...and notice.

Betsy Rosen is so excited to be working with Arts on the Horizon! Most recently, Betsy performed in a workshop reading of When Grace Comes In at Arena Stage. Her other regional credits include a local tour of The Winter's Tale (Wandering Souls), in which she played Hermione and Perdita, The Inspector General (Journeyman Theatre), Antigone (Forum Theatre), The Long Christmas Ride Home (The Studio Theatre), A Prayer for Owen Meany (Round House Theatre), Two Gentlemen of Verona (Maryland Shakespeare Festival), The Velvet Sky (Woolly Mammoth Theatre Company), Cleopatra in Again for Cydnus, and Romeo in Shakespeare's R&J (UMD), as well as numerous Source Festivals, Kennedy Center Page to Stages, and readings with Inkwell and Constellation Theatres. In addition, Betsy has designed, directed, or performed puppetry for Single Carrot Theatre, Folger Theatre, Factory 449, Dog and Pony DC, Round House Theatre, Solas Nua, Active Cultures, the Chicago Symphony Orchestra, Woolly Mammoth Theatre, The Studio Theatre, MadCap Theatre, the DC Fringe, and the Madeira School. Betsy is proud to be a substitute math teacher/tutor at BCC High School.
Caitlin Shea (Friend)

Caitlin Shea is thrilled to be apart of Drumming With Dishes and Arts on the Horizon. Previous credits include the workshop of Drumming With Dishes (Arts on the Horizon), Knuffle Bunny National Tour (Kennedy Center Theater for Young Audiences), Junie B Jones Jingle Bells Batman Smells u/s (Imagination Stage), Rudolph the Rednosed Reindeer (Adventure Theatre) and Grease (Olney Theater). Thank you Michelle and DK for this opportunity!
Billy Finn (Musician)

Billy Finn is thrilled to be a part of Arts on the Horizon's production, Drumming with Dishes. Other DC area credits include Folger Theatre: Hamlet, Much Ado about Nothing; Shakespeare Theatre Company: King Lear, The Dog in the Manger, Twelfth Night, Romeo & Juliet; Roundhouse Theatre: The Talented Mr. Ripley; The Kennedy Center: Teddy Roosevelt and the Ghostly Misteltoe, The Scarecrow and his Servant (reading); Constellation Theatre Company: Three Sisters; Factory 449: In the Flesh (reading); Virginia Shakespeare Festival: Romeo & Juliet, Love's Labor's Lost, Taming of the Shrew, Othello. Many thanks to Michelle and DK for including me in the fun. 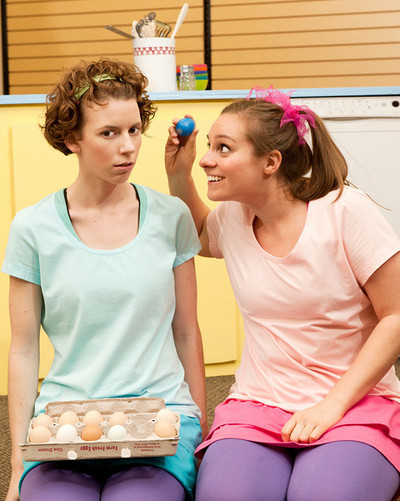 Drumming with Dishes on the Millennium Stage